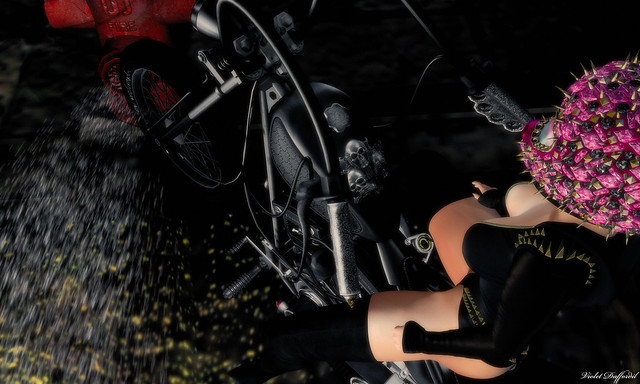 Speaking of journey, I named this blog post Death because it is one of the major arcana in Tarot Cards. The death card isn’t really about death though. It’s about change. If you think about it, you have to let something die out to change. You have to make way for rebirth. With death and rebirth, you learn a lot along the way.

I chose this picture to represent death is because of the skulls on the bike. Skulls have been used as a symbol for death–so I too am using them for that reason ♥. With death (change) and accidents, they occur for a reason–to grow, learn, mature, and move forward with that new knowledge….. like I should never be allowed to drive a motorcycle. With new knowledge comes wisdom.

While I’m talking about new  knowledge, It wouldn’t be right to not include the credits of this outfit. So here we go. Look no further than this month’s round at Uber.  My body suit comes from Foxes and my helmet is from Astralia. The motorcycle is from Sau. There is a color hud for the helmet and the bike. The theme this month was definitely everything motorcycle. It’s not my usual style, but sometimes it’s nice to change it up. If you’re wondering where those lovely items are located, please check out my credits down below.

This site uses Akismet to reduce spam. Learn how your comment data is processed.